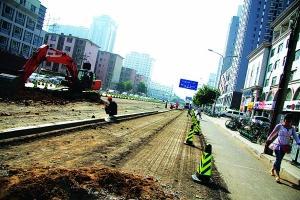 Since the start of the large-scale road reconstruction in the provincial capital, traffic congestion coupled with the impetuosity has increased the number of accidents such as smashing and rear-end collisions by 30%. Do not underestimate this figure, often a small accident, will now cause a large area of â€‹â€‹traffic congestion. In fact, as early as last year, the province has already issued the "Shanxi Province Motor Vehicles Financial Loss and Traffic Accidents Fast Claims Measure", and minor traffic accidents can be handled on their own. However, in practice, drivers seem to have no confidence in the "private" of both parties.

On June 2, the reporter visited the relevant department. The traffic police department appealed to the public that during the closure of several urban roads, they hoped that everyone would abide by the traffic rules and obey the command of the traffic police. In the event of a minor traffic accident, they should try to deal with the fast claims.

"Small accidents" increase by 30% a day

At 18:30 on May 31, it was the peak of the off-duty. Near the new intersection on the provincial capitalâ€™s North Street, vehicles moved slowly like ants.

Suddenly, the traffic stopped and, like the chain reaction, all the cars had their brake lights on. From time to time, some people stuck their heads and looked forward. After a while, the traffic began to slowly move forward. Before I found out, it turned out that when a van changed the line, it ran into a tail of a QQ car.

Next to the car, a middle-aged man and a fashionable woman are arguing and talking to each other. They parked the car in the middle of the road, called the police, and then contacted their respective insurance companies. The other vehicles had to stop and start a long wait. In fact, the accident was not serious. The van was just slightly shaded by the right front lampshade to the butt of the QQ car, but the two cars occupied a lane, and other vehicles could only slowly pass through the next lane.

After the traffic police arrived, they determined the responsible person. At this time, North Street had already queued up. More than an hour later, traffic returned to normal.

A minor road accident can block a road for more than an hour. This is not uncommon in the city's massive road reconstruction. According to the traffic police who dealt with the accident, due to the closure of many main roads in Taiyuan, the traffic was slow, the speed of traffic was slow, and the number of major traffic accidents was relatively reduced. However, traffic jams caused by the sudden start of the traffic, brakes increased, rear-end accidents prone to happen. On the other hand, on some roads with narrow roads and narrow roads, drivers spontaneously paralleled, artificially increased lanes, and lanes became narrower. However, minor accidents such as squeaking and rubbing due to forced lane changing and mixed human-vehicle movements were noticeable. increase.

According to statistics, in the past, the grass-roots brigade of Taiyuan traffic police handled an average of 1,000 accidents of various types each month. After the start of road construction, the daily average traffic accidents of traffic police brigade increased by 20 to 30, which was about 30% higher than before the road construction. Especially in the several major bypass routes around closed roads, the minor accidents that are suitable for rapid processing methods account for more than 80%. However, many accident drivers have to wait for the police to deal with them because they are concerned about their responsibilities. When the civilian police rushed from one accident site to another, even a single accident with a small loss would cause the road to be blocked, which would cause great inconvenience to the pedestrian and also cause great pressure on the traffic police to clear the access road.

Traffic accidents can be dealt with quickly

In October 2012, the Provincial Public Security Bureau Traffic Management Bureau jointly issued the â€œShanxi Province Motor Vehicles Financial Loss and Traffic Accident Quick Settlement Measuresâ€ jointly issued by the Provincial Insurance Regulatory Commission. The method clearly stipulates: the traffic that only causes vehicle losses between motor vehicles. In case of an accident, the parties themselves will withdraw from the scene, determine the responsibility, and go directly to the insurance company to handle the claim procedures.

According to the method of quick handling of minor traffic accidents, after a traffic accident, if the accident does not involve a third party; there is no casualty, the basic facts are clear, both vehicle damages are under 3,000 yuan; the accident vehicle can drive; both vehicles of the accident are in Shanxi Province. When the internal property insurance company has insured the compulsory traffic insurance, the driver should stop immediately. Under the premise of ensuring safety and setting up warning signs, the driver takes photos of the accident scene, the driver of the other party, his driving license and driving permit and marks the situation. The location of the vehicle's tires quickly moves the accident vehicle to a location that does not affect traffic and safety.

In other words, some people who have no casualties or damage to the vehicle will not need to have the traffic police arrive at the scene as long as the two sides have no objection to the accident. They can take photos and leave the card, and then go through the simple accident handling process, which can be handled by the insurance company as appropriate. .

However, fast claims are not applicable once the following conditions occur. These conditions are accidents that cause damage to property outside the vehicle, casualties, and the amount of vehicle damage that exceeds the scope of application of fast claims, and do not apply to fast claims. The motor vehicle has no signage, no inspection qualified sign, no sign of strong risk; the driver does not have a valid motor vehicle driver's license; the driver is suspected of drinking alcohol, taking state-controlled psychoactive drugs or narcotic drugs; carrying explosives, flammable and easy Explosive chemicals and dangerous goods vehicles such as poisonous, radioactive, corrosive, infectious pathogens, etc.; where one party has escaped, no quick claims are applicable. If no quick claims are applicable, the parties shall protect the site, dial 122 alarms, wait for the traffic police department to handle them, and deal with the usual insurance claims procedures.

First of all, to determine the responsibility of both sides of the accident, and then check the other driver's license and vehicle procedures, vehicle procedures include: license plate, annual inspection, driving this and traffic insurance, etc., after checking the above information can not move the car.

Secondly, the parties should photograph the site while ensuring safety. Photographs are the most important evidence of accident handling. Therefore, taking a picture of a collision location and a panoramic photo is essential when taking photos, and the parties can take as many photos as possible. Forensics.

After that, if both parties want to move the vehicle to a place that does not obstruct the traffic, and then negotiate and resolve the problem, if they cannot evacuate on their own, they should promptly turn on the hazard warning flashlight and set a warning sign 50 meters to 100 meters behind the vehicle. Profile lights and rear lights. It is worth reminding that if the parties should evade themselves and refuse to evacuate the site, causing traffic jams, the traffic police department should impose a fine of 200 yuan on the parties.

In addition, for many drivers who are unable to recognize the responsibility of the problem, the police introduced the three most common minor accident liability determinations that occurred on the road surface. These accidents accounted for more than 80% of the daily accidents, and everyone can judge on their own.